When I was anticipating my move from South to North Carolina in the mid-1990s, I expected to find a wealth of Native American culture here. Because NC is the home of the Eastern Band of the Cherokee Nation, I thought that their influence would be felt everywhere.

I soon learned that there's an annual pow-wow in Greensboro and not much here in Winston-Salem. But just before I went in for the sonogram, the chance arose for me to go to a self-help convention in Cherokee.

The Cherokee community runs the convention, so it is Native American through and through. They have pow-wows and talking circles along with the usual speaker meetings, and a big feast with fry bread, pinto beans and all the fixings after the Saturday night pow-wow.

The convention was in early November, and by then, I knew something was wrong with me. All of the symptoms that I had been able to deny were presenting in CinemaScope: no energy, low-back pain, a hard distended belly, severe gas pains, digestion problems and early satiety. I had them all.

I was jumpy and grumpy and looking for answers everywhere I went.

That Veteran’s Day weekend was hard and cold, but the convention and the people were incredibly warm and welcoming. I immediately attached myself to an amazing woman from the Midwest, Kate. Kate was a clown and a nurse, who lived in a motorhome and traveled nationwide caring for people in their homes as that work came available.

She was big, blonde and raucous and quickly sussed out what I was looking for – a sweat lodge for women that was being provided by one of the Cherokee medicine women. The sweat was happening under the radar, not a public event, so we had to be discreet. There were hundreds of people at the convention, and a sweat has to be small and intimate.

Sweats are deep Native traditions. They require endurance and a level of mental health and understanding of the spirit that is not always present in “cultural tourists.” I was trying not to be one of those as were Kate and my good friend Tina S., but in many ways, we were out of our depth.

The afternoon of the sweat we went to the medicine woman to request permission to participate. We gave her the traditional gift of tobacco and helped build the lodge. We also helped find and carry the stones that would be heated to create the “sweat.”

The lodge was basically a depression in the ground covered over with a tent and branches. There was a smoldering fire in the middle full of hot stones that the leader splashed with water occasionally to make steam.

Tina S. recalls: “We (about 12 women) wore towels and crawled through the opening of the lodge and sat around in a circle. I remember at that point being fearful and not knowing what to expect. I was afraid it would get really hot in there and it would be unbearable. When we sat down, I guess we took off our towels and it was pitch dark. The leader began to explain what we were about to do and what she wanted us to discuss. She poured water over the hot stones that had been placed in the hole in the ground. Then we ate some type of rice mixed with fruit or something like that and shared different things with each other in the circle. I remember I was fairly new in sobriety (about 10 months) and was very emotional. I cried a lot when I shared and for some reason, kept thinking about my grandmother who had passed away about three or four years before. I think we also passed around a pipe of tobacco. … I think we also had one more round of discussion. … When it was over, we crawled back out through the same opening and I remember feeling free and was truly moved by the experience.”

We also prayed a lot, and, after sweating for hours, I had an intense pain in my low back, but I felt strangely calm and certain that a resolution to my mystery illness was at hand.

The ground was hard and cold and absorbed gallons of woman-sweat. When we finally crawled out of the lodge, the sky above was crowded with blazing stars in the cold, black night.

We joined the larger group for a Native American feast and felt as if we were being welcomed home after a Vision Quest. I was exhausted at first but then had a burst of energy and danced for hours to a cover band.

I woke later that night in my motel room completely dizzy and disoriented and walked right into a wall on my way to the bathroom, then dreamed wild but now unremembered dreams and finally fell into a deep, peaceful sleep.

That sweat in Cherokee remains the only one I have done. Sweats are essentially purification rituals, and I felt completely cleared and cleaned out and ready for my next trial. I will be forever grateful to that tolerant medicine woman who so patiently guided us - some novices and some experienced, Native sweaters - through that intense cleansing journey into the heart of Mother Earth.

Next week: The sonogram.
Posted by Lynn (Prema) at 2:14 PM No comments: 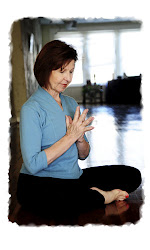